The first Elmore City Badger Pride band was first established in 1938. (See photo page in this section.) The band director was Mr. Allen W. Hubbard (b.1911 - d.1980). Mr. Hubbard, who was from western Oklahoma, married Juanita McConnell of Maysville in 1936. Juanita was a nationally recognized musician who later hosted piano seminars at Princeton University. By the early -1940s, the Hubbards had moved to Altus, Oklahoma, where they opened a music store.

During WWII, the high school band program was discontinued. In the spring of 1952, a meeting was held to discuss the possibility of adding a football program and re-starting band. The first Badger football team took the field in 1952, and the Badger Pride Marching Band made its return in the fall of 1954.

The Badger Band and JFK

During the first week of November, 1960, Democratic Presidential Nominee John Fitzgerald Kennedy began a final nation-wide campaign swing in California. Kennedy was in Los Angeles on Tuesday and San Francisco on Wednesday. He began Thursday in Phoenix before flying to New Mexico, Texas, and Oklahoma City.

According to reporter Jim Young of the Daily Oklahoman, Kennedy arrived in Oklahoma City at 7:25 Thursday night. Accompanying Kennedy on the plane were his sister, Patricia Kennedy Lawford, and Governor J. Howard Edmondson. A crowd of 3,500 people had gathered at the airport to greet the Kennedy delegation. Some had waited throughout the afternoon for his arrival. Among those in the crowd were former Governors Raymond Gary and Roy J. Turner, and United States Senator Mike Monroney.

Jim Fisk, former aide to Governor Gary, served as master-of-ceremonies. As Kennedy emerged from the plane, Fisk led cheers and called for music from the Elmore City High School Band. Kennedy delivered a speech at the airport before moving to Reding Shopping Center, where 7,500 people had gathered. Later that evening, he made an appearance in downtown Oklahoma City. The following morning, Kennedy returned to Washington D.C.. - before heading to Virginia.

Five days after being welcomed to Oklahoma with music from the Badger Pride Band, Senator John F. Kennedy was elected President of the United States in one of the closest elections in history. 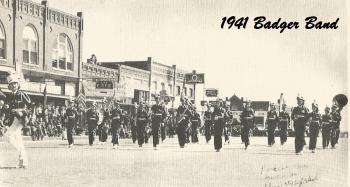